It was the 25th November 1853. Captain John Heard sighted land*. Heard’s wife, who was on board, called the land “a frigid looking place”.

How right she was, and so wrong too. 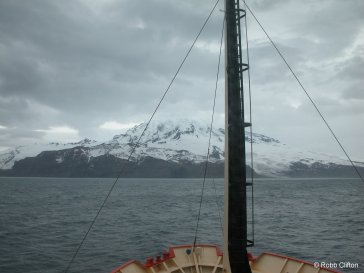 Heard Island. The view from aboard the Southern Supporter. © Robb Clifton

Research involving historical data can turn up many a query and solve many a mystery. So can investing in scientific research and monitoring. The following scientific expedition involved much detective work including historical literature which informed monitoring and research. 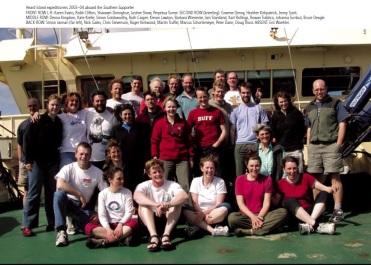 On Heard Island, one hundred and fifty years after it was first sighted, 28 scientists and support crew landed. I went ashore with 12 people to ‘Try Pot Beach’ otherwise known as ‘The Spit’, as part of the Terrestrial Ecologist crew. So started two and a half months on subantarctic Heard Island.

It’s surprising Heard Island, and neighbouring McDonald Island, were not discovered earlier given the proliferation of whaling and sealing in the region at the time e.g. on nearby Îles Kerguelen*. But when you look at their location you realise why they were missed. Heard Island and MacDonald Islands (also known as ‘HIMI’) is a long way from anywhere^^. The Furious 50s live up to their name. The wind, combined with horizontal rain and moraine sand is incomparable to anything I have ever experienced and I soon learned why we were supplied with goggles.

We arrived on that ‘frigid looking place’ via the Southern Supporter (known for its part in combatting illegal fishing), departing Fremantle on December 2nd 2003 with 28 expeditioners including: 5 support crew and 23 scientists (7 terrestrial ecologists (6 women, 1 man), and 13 zoologists (3 women, 10 men) and 3 glaciologists (1 woman, 2 men). There were 11 women** and 17 men. This was quite an achievement for Antarctic science, a discipline usually dominated by men. 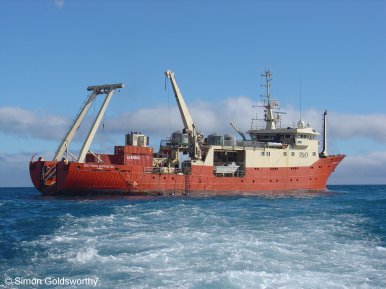 Stepping onto the LARC. © Justine Shaw

There are many reasons for studying the flora and fauna of Heard Island. Unlike many other subantarctic islands, introduced predators such as cats, rats and mice are totally absent. With few human visitors (the odd yacht does visit, but usually landing at Atlas Cove), the likelihood of invasive species is unlikely. With #speciesonthemove, and the current pest free status, Heard is the ultimate laboratory upon which to study changes in distribution and abundance of flora and fauna in a climate changing environment.  Since the successful 2003/2004 expedition, Australia has not undertaken another comprehensive scientific expedition to Heard Island so this pest free status stands from then. With low levels of introduced species the island provides a unique scientific baseline for documenting ecological change. 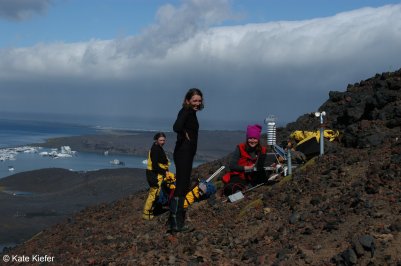 Setting up for measuring Pringlea antiscorbutica phenology at the coast. © Kate Kiefer

Who would have thought that a terrestrial ecology team’s visit to Heard Island would result in a bit of detective work? We aimed to complete phenological and physiological research. In addition we found ourselves becoming detectives, searching for clues and signs and then, back in Australia, piecing the information together and filling in the gaps. The detective work began on Macquarie Island and then onto Heard Island and surrounding Marion Island and Iles Kerguelen. It would not have been successful without the expedition investment into long-term and collective knowledge, field based surveys, personnel and the thirst for scientific exploration. 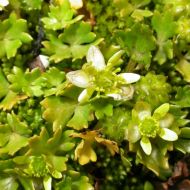 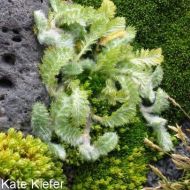 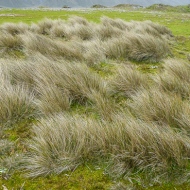 On Heard Island in 2003–2004, with such a fantastic laboratory at our fingertips, the terrestrial ecology team commenced an ambitious program aimed at gaining an insight into the influence of climate change on subantarctic plants. Among many predictions from climate change is the outcome that due to warming, temperate species will adjust their range #speciesonthemove. Heard Island is a unique setting to study such changes with its documented and mapped flora, and lack of human visitation.

Below is an image of Stephenson Glacier, over 60 years ago and over 10 years ago. Remarkable isn’t it? The glacier retreat is faster than anyone thought possible. Check out this blog for a more recent update (click here). 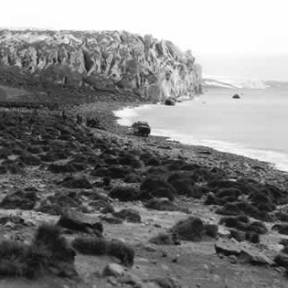 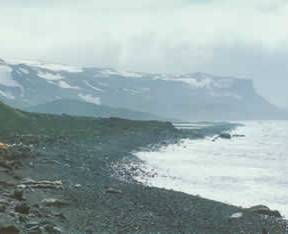 The retreat of the Stephenson and nearby Browns glacier’s has ‘opened up’ land: successional studies of moraines demonstrate the early colonisation of non-vascular and vascular plants. And thus the detective work begins with early colonisation. Species once thought restricted in range have expanded. In 1986 Ranunculus crassipes, previously not recorded from Heard Island, was found in wet seepage at the base of Skua Beach bluffs. 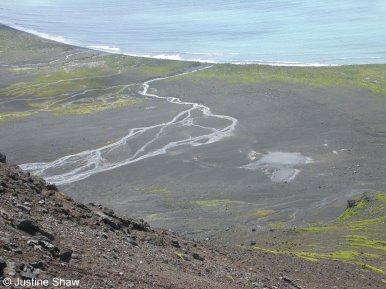 View up to the bluffs. Sooty Valley curls around to the right of this image.

When we mapped the species in 2003 we found substantial expansion in its range (Bergstrom et al. 2006). It is possible that the population found in 1986 was young, due to previously snow or ice covered land being ‘opened up’. Since this time, expansion has been prolific, but restricted to wet seepage areas.  With observed flowering and propagules being funnelled and nurtured by snow and ice, as well as propagules that utilise animals (perhaps birds) as vectors, Ranunculus crassipes is on the move. Jenny showed us where Ranunculus used to be in 1986 and in 2003 Justine and I mapped all the Ranunculus we could find. But it was difficult due to steep terrain and/or the presence of wildlife such as pupping seals and/or nesting birds. Places we couldn’t reach in 2003 can now be reached using new technology, e.g. Unmanned Aerial Vehicles (UAVs), enabling the collection of high-precision data about hydrology and terrain.

And who could have known that the 1986 detective story of Ranunculus crassipes was to be repeated in 2003?

There were only 8 vascular plants before Jenny arrived at Heard in 1986; this visit added three more. And in 2003 there were still only 11 vascular plant species recorded. We certainly didn’t expect to find a twelfth species.

After a day exploring Paddick Valley and sampling the bryophytes there, I wandered over to Jenny and Jo as they were standing in apparent discussion. Jenny pointed down.  My squeals of delight and astonishment echoed around Paddick. What on earth was Leptinella plumosa doing in the middle of Paddick Valley? What on earth indeed. It wasn’t recorded from the island. And so we searched. Jenny and I walked around the whole river terrace area searching, covering any likely spot. There must be more specimens, after all, the one Jenny had found was flowering and healthy. 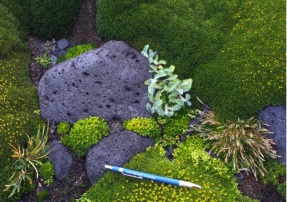 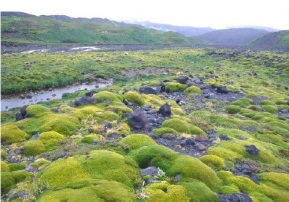 But just because we didn’t see any plants doesn’t mean there aren’t any more. Heard Island is rapidly changing. It is totally possible that more Leptinella plants are there and/or that other plant species will arrive there. Strict quarantine regulations will help reduce this possibility, but that doesn’t mean that unwanted, weedy, encroaching, competitive, invasive species won’t arrive. They will and the detective work will continue.

Firstly, we tried to establish where the Leptinella plumosa plant on Heard Island came from. In our paper in 2006 (Turner et al. 2006) we hypothesised it was likely the Leptinella plant (propagule) came from the closest neighbouring French Islands, where it is abundant. The Isle Kerguelen group is approximately 500 km to the northeast of Heard Island. At the time the paper went to press DNA analyses were in process. We now know DNA analysis of samples from “Heard, Marion and Macquarie Island resulted in no sequence differentiation in the ITS and psbAtrnH markers” (Himmelreich 2009 p70). The results could not distinguish from the Heard sample from Macquarie or Marion Island samples. These three islands are thousands of kilometres apart. The results suggest a recent dispersal event.

The question remains as to how the Leptinella plant arrived at Paddick Valley and happily set down roots, thriving enough to flower. What was the vector?

Whichever way it came, given Leptinella plumosa is a circumantarctic species which has successfully colonised and dominated coastal land across the extensive Southern Ocean. It is inevitable that it has colonised Heard Island. For all we know it may have been there for decades, somewhere unseen (once again, a UAV would have been handy!). And once again, thanks to detective work, we found a link. Taylor (1955), in describing Festuca contracta from Handspike point, documented a patch that looked different, hypothesising some genetic difference. It’s highly likely that he described Poa litorosa well before its first official recording in 1983 (Bergstrom et al. 2006).

Two questions arise from this Leptinella discovery, the expansion of Ranunculus crassipes and the discovery of a probable earlier recording of Poa litorosa. 1. How will the ecology of the landscape change with the arrival of new colonisers? and 2. What responsibility do we have monitor and regulate arrivals, or potential arrivals?

Leptinella plumosa is a member of the Asteraceae, one of the largest and most widespread flowering plant families. It has huge potential to expand on Heard Island. The retreat of glaciers on Heard Island is creating more habitat for early successional species. Ranunculus crassipes is highly likely to expand further with the increase of wet seepage areas due to melting glaciers. Strict quarantine measures will ensure the carriage of propagules by humans is prevented. However, if Leptinella did arrive on Heard via humans (and the evidence does not exclude this possibility), we have a responsibility to document its progress in a changing environment. Natural dispersal e.g. a propagule hitching a ride on the leg of a migratory seabird propelled along by extreme weather events cannot be prevented and the opening up of new real estate by disturbance will see an increase of potential and real invasive species into these areas. 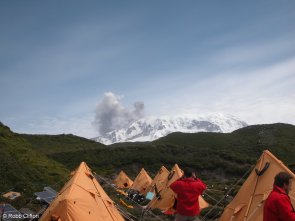 Ecologists were fortunate enough to witness the long distance dispersal and early stages of establishment of Leptinella plumosa. In the absence of any clear evidence concerning the means of arrival of L. plumosa on Heard Island, we need monitoring of the known plant during subsequent Australian Antarctic Science expeditions to Heard Island. We have the technology at our finger tips to do this efficiently and precisely, e.g. UAVs and remote sensing. Ecologists need to combine now with remote sensing specialists to employ this technology to inform management and conservation of flora in the subantarctic. 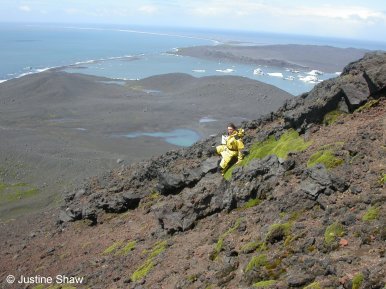 * At first Captain Heard thought he saw an iceberg, but upon nearing, he declared it an island. It was later called Heard Island. Given whaling and sealing had taken place for a long time in the area, it is not surprising that the discovery of land (Heard Island) was mistaken as an iceberg. Notwithstanding the fact that the island is predominantly snow covered so the mistake is acceptable. McDonald Island, some 40 km west of this land, was discovered a few months later, on January 4th, 1854, by Captain William McDonald.

^^ Starting at south-west mainland Australia head about 4000 kms. From southeast Africa head approximately 4600kms. And from Antarctica draw a line to 1000 kms north. At the intersection you will find Heard Island and MacDonald Islands (also known as ‘HIMI’), a subantarctic island group surrounded by the choppy southwest Indian Ocean. Specifically, the group is located at 53°S 73°30’E.  Once you have drawn your lines you will notice HIMI is a long way from anywhere.

**One thing to note: not one of these women was a biological mother. There were numerous fathers on the island, including one father whose partner had recently given birth.

5 thoughts on “Ecology detectives: species on the move on Heard Island”