As a child, getting out in the Australian ‘bush’ was a regular event (image taken ~1982)

My father scanned all the family photos and it has been interesting to compare the places we visited back in the 1970’s and 1980’s with what they look like now. But what also struck me was the importance of our holidays, from my childhood to now.

Filing the photos made me realise that for me, my childhood camping trips with my family in the Australian bush are what I would class as my first and most significant childhood introduction to ecology. I also believe it influenced why I chose to become an ecologist.

What was your first significant encounter with the environment as a child?  Do you believe it influenced your subsequent career choice?

I’m very glad my parents took us outdoors. I don’t think they expected me to take my experiences further towards a career. But I do believe that in taking us outdoors they directly shaped my, and perhaps one other siblings, career choice, and also indirectly influenced my remaining siblings. 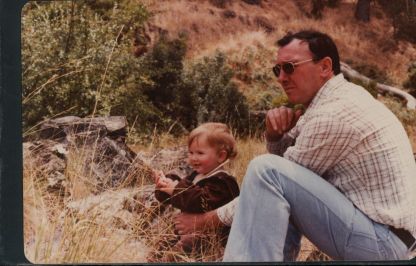 Getting dirty was all part of the deal

And there were a few of us to influence. I am the third of six children, which meant that holidays were done simply. Nowadays, camping is trendy. But when I was growing up it was more the only option than a popular thing to do. Camping was cheap, fun, and accommodated all of us at a reasonable price.

My parents had no environmental background. What they did have was a keen interest in exploring and learning. My first field guides were Gould League bird books. We joined the Junior Ranger program and We were immersed in nature. The outdoors was a free, easily accessible classroom.

Ditch the technology and an inexpensive alternative awaits you.

We also didn’t have the competition of indoor attractions that children have today: computers, iPad’s, iPod’s, Xbox’s etc. We did have the television and believe me being a large family the free babysitter was used! But you can’t take a television outside. Books were transportable and we read outside beside a river, lake, beach and when it rained we stayed at the campsite in our sleeping bags and read  listening to the rain on the tent.

We didn’t have the dome tents of today. Our home was a canvas tent with large, heavy metal poles and two rooms: a back room for all to sleep in and a front room for cooking and eating. As we grew up so did the number of tents, eventually seeing us book two tent sites.

We had no polarfleece. Our clothes were handmade and of cotton or wool. We had no featherdown sleeping bags and they hardly rated to the 0°C sleeping bags you can buy today. We slept on airbeds (‘lilos’) which were always being repaired. Interestingly, on my trip to Heard Island in 2003-2004, airbeds were used.

Today’s parents and the outdoors compete with the attractions of technology. I know how hard it is. ‘Can I play the wii?.’, ‘Can we have some time playing on the iPad?’, ‘Mum, can I turn on the TV?.’ Argh! We are fortunate in Australia to have a very large, natural playground outside. Our urban areas still thrive with wildlife. And in the big cities the ‘bush’ is but an hour’s drive away. We also have a broad reserve system that encourages exploration at many levels so there is something to suit everyone: Wilderness areas allow you to escape it all; national parks, state parks, reserves (e.g. for Victoria) and state forests provide user friendly campsites and facilities so you can ‘car-camp’ or pack everything into your pack and become a snail. Even in urban areas you can wind your way along paths in parkland and easily find birds, invertebrates, plants, even platypus.  Ditch the technology and an inexpensive alternative awaits you.

My parents made use of what we had. We camped within the borders of many of Australia’s national parks, mostly centred on the southern state of Victoria. I think we visited most of the national parks, state forests and reserves that Victoria had to offer; in my  years working with the Arthur Rylah Institute for Environmental Research in Melbourne I think I can safely say that apart from a few places, I’ve been to most of the parks and reserves in the state. Victoria is about the size of New Zealand so you can imagine we had much to explore. When there were only four kids, we would pile into our gold Kingswood sedan, and go. Later, our Mistubishi people mover clocked up the k’s. 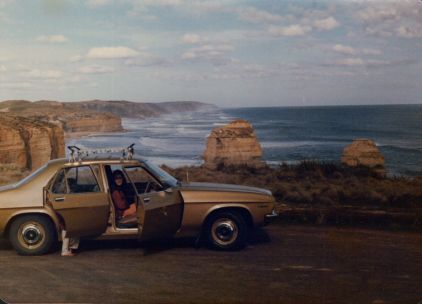 Working my way through the photos I chose a few I thought I could refind using Google images, for interests sake. I wanted to see what the landscape photographed in the 70s and/or 80s looked like now. My father and I did find a few, and I’ve included them below.

So where did we go? We visited the Great Ocean Road more than once. Along the road is the Great Otway National Park. The lush forests of the Great Otway national park are very similar to those of north-west Tasmania. Here the majestic Eucalyptus regnans and E. obliqua tower above broad leaf shrubs, ferns, bryophytes, fungi and lichens. Mapping the vegetation types for the Otways RFA between 1996-1999 brought back memories of time I spent here as a child. For our mapping we visited Melba Gully; I’d been there before.

Described as one of the wettest places in Victoria it is dominated by cool temperate rainforest: Myrtle Beech Nothofagus cunninghamii and Blackwood Acacia melanoxylon reach for the skies whilst the Treefern Dicksonia antarctica, and Broad-leaf Daisy Bush Olearia argophylla and many bryophtyes find what space they can across the forest floor. The image below is credited to www.masasoft.com. It gives you an insight into what Melba Gully looks like today.

Wet sclerophyll forests featured much in our travels and it’s poignant that my work today focuses on towering giants. As kids we visited Mt Donna Buang in snow and I recall driving the winding roads of the Black Spur.

As fate would have it, my honours was spent exploring the O’Shannassy Catchment which was close to these two areas.  Mt Donna Buang has changed from a ski resort to a day trip snow destination and the Black Spur and surrounding forests were burnt by the Black Saturday fires of 2009. 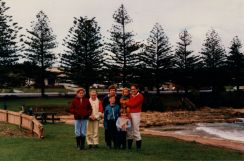 Our family at Port Campbell Beach. ~1985
The Twelve Apostles,

Some of the ’12’ Apostles. I’ve tried to relocate this 1980s image using todays technology, and cannot.

which never numbered twelve, dropped from 9 isolated limestone stacks to 8 in 2005. The collapse of rock features reinforces the immense power of the Southern Ocean. With further erosion of the headlands happening at approximately 2 cm per year, more stacks are expected to form and collapse in the future.

As if to emphasise the power of the elements, London Bridge fell down and I was lucky to see it before this happened. 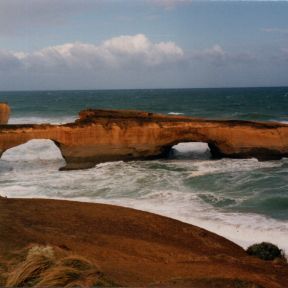 Futher west on the Great Ocean Road  is Tower Hill Wildlife Reserve, located between Warnambool and Port Fairy. Interestingly, this volcanic landscape was declared as Victoria’s first national park in 1892, but land use by man continued regardless, with the evidence still obvious today. The native flora and fauna are returning and this is where we were chased by emus who wanted to eat our lunch. I do say we stood. Despite the available picnic table we stood. We needed to be ready to run away with our lunch! 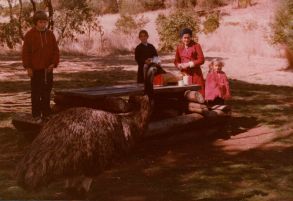 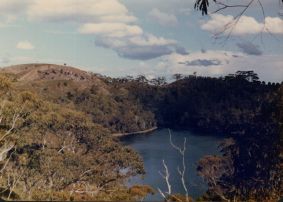 The crater lake at Tower Hill.

Also near Warnambool you will find Hopkins Falls. The falls plunge 12 m down over dark basalt rocks which remind you of the landscapes volcanic history. The trees in the background of the image in 2010 have survived since the mid 1970s.

Hopkins falls in the late 1970s

Mt Buffalo National Park was visited often. First, with four young kids, we stayed on top of the mountain and explored. Later, my parents packed up six kids into the van, hitched up the trailer, strapped the canoe onto the car roof and we were soon back on that mountain top. Lake Catani was explored, the Twin rivers conquered (part of an underground river system) and The Horn, Cathedral Rocks and The Monolith visited; the latter we even walked to in the dark with some ‘camping kids’ in order to see the sunrise. 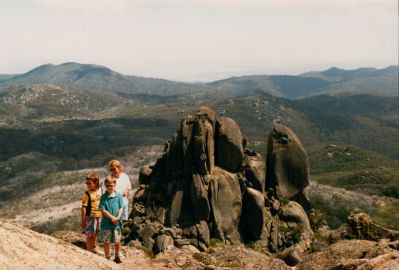 Cathedral rocks from below.

The snow gun was huge!

The bridge, below the Lake Catani dam wall.

Looking back over the photos two important points came to mind.

I’m not the first person to make these points.

In 1974 the Australian Minister for the Environment and Conservation, Moses Henry “Moss” Cass, at at a meeting of the Organisation for Economic Co-operation and Development in Paris, addressed the Environment Committee. In his speech he included words of the environmental activist Wendell Berry:

“We rich nations, for that is what we are, have an obligation not only to the poor nations, but to all the grandchildren of the world, rich and poor. We have not inherited this earth from our parents to do with it what we will. We have borrowed it from our children and we must be careful to use it in their interests as well as our own. Anyone who fails to recognise the basic validity of the proposition put in different ways by increasing numbers of writers, from Malthus to The Club of Rome, is either ignorant, a fool, or evil.”

Get your children outdoors and show them, teach them, about nature. We choose to take our children camping and/or to explore the outdoors, for more reasons than just because it is a easy option. I know how beneficial being immersed in nature was to my childhood and how integral it was in shaping the person I am today. My children will have that experience too.

Looking back at the photos of my childhood camping, many of the places we visited some have changed and I wonder what will be left for my children to see.

In the end, what really matters is that the children of today see and experience the environment NOW. Only in taking them out into the world can they keep us in check and remind us that we are using the world for their interests, as well as our own.

Please feel free to comment on your first encounter with ecology/environment/nature as a child. I’d love to hear about your experience(s).

And if you have an updated image of any image in this blog, I’d love to see it.

Thanks to my family, especially my mum and dad, for creating the outdoors for me.

5 thoughts on “How a childhood outdoors shaped my ecological career”